Information by segment as defined by USBLS

Although Non-Vet Pet Services is the smallest industry segment, it continues to grow and 2015 was another good year. Spending reached $6.26B, a 0.58B (10.2%) increase over 2014. (Note: All numbers in this report come from or are calculated by using data from the US BLS Consumer Expenditure Surveys)

The chart below gives a visual overview of recent spending on Pet Services.

The increase has been consistent since 2013 with a definite spending “lift” in the second half of both years. Now we’ll start “drilling down” to look at spending by demographic categories. First, by Income… 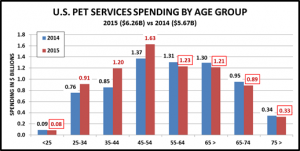 Take a look at some Key Demographic “Movers” then we’ll wrap it up.

Overall, the increase in Services Spending was about convenience, rather than physical need, as it was driven by the younger crowd – Gen X and the older Millennials. The Boomers spent so much in upgrading their Pet Food that a small decline was not unexpected. Income was also important in order to afford the rising service prices. Whether the household consists of 1 or 2+ members, all the adults worked. College educated, managers or professionals accounted for the vast majority of the increase. Retired people had a big decrease.

It really didn’t matter in what region of the country that you lived, as long as it was in a city or the suburbs. Homeowner ship also wasn’t a big factor as both homeowners and renters had increases. The spending increase by Hispanics was good news. Singles had the biggest growth while the “traditional” married couple with one earner and 2 children was almost certain to spend less. Basically, the increase was driven by busy “younger” (25>54) groups who needed help with Pet Parenting and could afford to pay for it.