Except for 2017, Non-Vet Pet Services has shown consistent growth in recent years. However, in 2018, the performance was spectacular. Spending grew $1.95B to $8.72B, a (+28.9%) increase from 2017. The number of outlets offering Pet Services has been increasing at a rapid rate. It looks like that this commitment really paid off in 2018. In this report we will drill down into the data to see what groups fueled the biggest spending increase in history for this segment. (Note: All numbers in this report come from or are calculated by using data from the US BLS Consumer Expenditure Surveys)

More specifically, the 28.8% increase in Total Pet Services spending came as a result of: 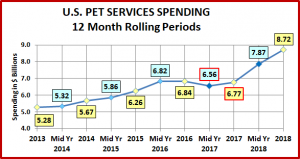 You can see that spending flattened out for 18 months from mid-2016 through 2017. This was a time when competition was building in the marketplace through an increased number of outlets. Value was available but it didn’t increase the number of users. The existing users just paid less. However, the impact of increased availability and convenience really hit home in 2018. Despite a return to a more normal inflation rate, +2.4%, more people opted to use Pet Services and to do it more often. This generated by far the biggest spending increase in history for this segment, +$1.95B, which came from strong growth in both halves. Now, let’s look at some specific spending demographics. First, by Income Group.

Although we had to take the numbers to 3 decimal places, all age groups also spent more on Services in 2018. However, the increase was clearly driven by the <55 groups, especially the 35>44 year olds. Here are the specifics:

Finally, let’s take a look some other key demographic “movers” behind the 2018 Pet Services Spending “Explosion”

The Services spending increase was very widespread. Overall, 72 of 82 total segments (88%) spent more. As you can see from the chart, 6 of 12 demographic categories had no segments that spent less on Services in 2018.  This included:

The decreases were also small. The average drop was -$0.08B, driven by Boomers and Retirees who each fell -$0.17B.

Pet Services is the most discretionary of all the Industry Segments, so income is the most important factor in spending. Although the spending lift was widespread across income groups in 2018, the biggest driver was the $100K+ CU’s. This dependence on income is reinforced by some of the winners in our chart above, including:

On the upside there were some of the “usual suspects”:

On the downside, here are 5 groups with decreased spending that have a common thread:

For the younger Baby Boomers Pet Services’ spending was basically flat, +$0.03B. It is the older Boomers, specifically those who have retired, that drove most of the few demographic spending decreases in the Services Segment.

2018 was a year like no other in the history of Pet Services Spending, To put the $1.95B increase into perspective, the previous biggest gain was +$0.8B in 2009. In fact, total Spending for the Services segment didn’t even break the $2 Billion barrier until 1999.

So, what caused this eruption in spending? We saw the impact in 2018, but it actually has been building for a few years. In an effort to counteract the impact of the internet and the mass market, more and more pet outlets began offering Pet Services. Afterall, “You can’t get your dog groomed online”. “One Stop Shopping” is always a great draw for consumers. Retailers began applying this to Pet Products and Services. Convenience…which included a rise in mobile grooming.

The “movement” didn’t show immediate positive results. We saw some turmoil in 2017, as Services Spending actually fell -$0.07B, quite a rarity. The increased number of outlets caused some pricing pressure. Consumers are always looking for a good deal. In 2017 they found it. It didn’t change their overall behavior or spending frequency, They just paid less.

However, in 2018 the convenience message finally hit home across the Market. Significantly more consumers began using Pet Services for the first time or more often. We’ll see if the Segment can maintain this new level. 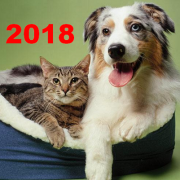 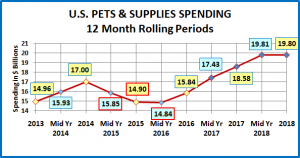 That gives us an overview of the situation. Now let’s look at the “who” behind the numbers. First, we’ll look at spending by income level, the most influential demographic in Pet Spending.

In 2018 The spending increase was driven by the $100K+ group, those least affected by price, but it is not that simple.

The increase was driven by $100K+, but the performance of the $30>70K group showed that pet parenting is widespread across income groups. We also saw that price is a key factor to almost everyone in a discretionary segment like Supplies.

The increase was driven by 25>54 year olds, Millennials and Gen Xers, but every group but the 65>74 year olds spent the same or more on Supplies in 2018. However, the price increase had a definite impact. Here are the details.

The impact of the price increase was readily apparent in this category. While 6 of 7 groups maintained or increased their Spending in 2018, 5 of 7 had decreases in the 2nd half. The other 2 had increases but they were 40% less than the 1st half.

Next, let’s take a look at some other key demographic “movers” in 2018 Pet Supplies Spending. Those boxed in black are different from 2017. If they are boxed in red, they flipped from 1st to last or vice versa.

There was some turmoil. 18 of 24 segments (75%) are different from 2017. 3 flipped from 1st to last and 1 went from last to 1st. Overall, the winners are definitely stronger than the losers. That’s what produced the $1.22B increase.

Three categories: Housing, Area & CU size had no negative segments. You see some of the usual “suspects on the “plus” side, like White, Not Hispanics, Homeowners with mortgages, Suburbanites and Married Couples only. The importance of income to Supplies spending is also clear with $150K+, 2 Earners and College Grads all having the biggest increases.

The positive influence of the younger crowd is very apparent with Millennials, 35 to 44 year olds, 4 People CU’s and white collar workers coming out on top.

On the downside, you see the impact of the strong inflation on Supplies Spending. There are a number of lower income, and/or price sensitive groups who spent less on Supplies in 2018. They include, Retirees, 65 to 74 year olds, Single Parents, 2+ people CU’s with only 1 Earner and those without a high school diploma.

The biggest “losers” in 2018 Supplies Spending were the Baby Boomers. They were down -$0.62B after an increase of $1.11B in 2017. That’s quite a turnaround. I looked a little closer and found that they were up $0.02B in the 1st Half of 2018, then went down -$0.64B in the 2nd half. In the Food Segment we saw evidence of reduced spending due to a number of their children moving out on their own. This undoubtedly contributed to the drop in Supplies $, but the drop also coincided with the price increase. I decided to look closer at the impact of that inflation across the demographics.

The following chart shows the biggest 2nd Half “losers” in 2018 Supplies Spending along with the winner in the category. To make the list, a segment had to have a minimum change of $0.1B.

Supplies Spending started out strong in 2018. In the 1st half, 67 of 82 demographic segments (82%) spent more. Then came the 2nd Half. Prices increased by 1.7% and only 38 segments (44%) had a spending increase over a year ago. By year end, 64 segments spent more on Supplies (78%). 2nd half numbers were not all bad. 5 segments that started out negative ended up on the plus side for the year. However, 8 segments that were positive in the 1st Half ended up spending less for the year because of the 2nd Half. Plus, some of the effect of inflation was hidden. 30 segments increased spending in both halves. However, 24 of them 80% had a smaller increase in the second half. The inflation had a broad impact.

The spending decrease was -$0.01B in the 2nd Half of 2018. In a couple of cases the behavior was clearly divided.

Age – Perhaps, it is because they are less focused on “need” and have a more expansive and active “take” on Pet Parenting than their older counterparts, but Supplies Spending has always skewed towards the younger groups. The spending in both halves of 2018 by 25>44 yr olds, Millennials and 2+ Unmarried Adults reinforces this observation.