The internet has become a huge part of our lives, affecting all aspects of our behavior, not the least of which is retail spending. U.S. consumer spending is driven by value, convenience and selection. This is a near perfect match of the “game plan” of the internet. As a result, the evolution of the retail market is accelerating as increasing numbers of consumers, across an ever broadening range of demographics, migrate to internet retailers. Brick ‘n mortar retailers are well aware of this movement and continue to increase their commitment to the .com divisions of their businesses.

In this report we will take a closer look at the total E-commerce business in the U.S. This includes sales from non-store retailers as well as the internet sales from the .com divisions of companies who derive most of their business from brick ‘n mortar outlets. We accomplish this by combining data from 4 separate reports published by the U.S. Census Bureau.

The increase has been very consistent since the millennium, with the only slow down coming in 2008 and 2009 as a result of the Great Recession. However, while e-commerce growth notably slowed, we should remember that the total retail economy actually decreased in 2009 for the first time since 1956. 2010 and the years since the recession have shown strong increases in E-commerce as the new “value conscious” consumers looked to the internet for savings. Perhaps even more significant than the spectacular growth in dollars, is the growth in overall market share. Since 2000, E-commerce has moved from insignificance – less than 1%, to a 9% “force” in the retail market.

We see the annual dollars but are they consistent year round? Is there a pattern to E-commerce sales? The following graph shows what the sales looked like by calendar year quarter in 2017.

The 4th quarter holiday lift for 2017 was +38%, up from +33% in 2016. However, the quarterly spending pattern seen in the chart above has been remarkably consistent, within 1%, for every year since 2000, with one exception. The 4th quarter of 2008 was only 28% of the year’s total. Consumer anxiety over the impending economic crisis reduced holiday spending that year. However, the pattern returned to “normal” in 2009.

Now let’s take a more detailed look at E-commerce sales. Last year the Census Bureau started breaking the E-commerce $ down by retail channel so we can see how the brick ‘n mortar companies are doing in their online battle with non-store retailers. Because of the detailed nature of the data, there is a lag time. This chart documents 2016 $ales. 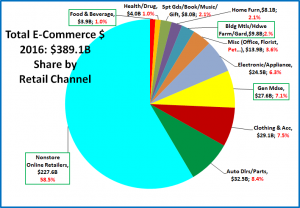 In 2016, E-Commerce Sales increased $48.7B (+14.3%) over 2015 so it was another strong year for online shopping. Every channel but Health & Drug stores increased their E-commerce $, but only 4 channels gained in share. These “winners” are boxed in green. All 4 of these retail channels are very important to the Pet Industry. In the last Economic Census, they accounted for 65% of all Pet Products sales in the U.S. Here are their E-commerce specifics:

Let’s also take a closer look at another channel of interest to the Pet Industry.

In 2016, Non-store retailers won the online “battle for the bucks” with their brick ‘n mortar rivals by a margin of 58.5% to 41.5%. Let’s look at recent history to see how this war is going. 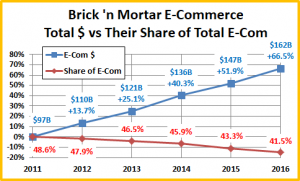 The E-commerce sales for primarily brick ‘n mortar businesses increased $65B (+67.0%) between 2011 and 2016 but their share of total E-commerce sales fell from 48.6% to 41.5% – a 14.6% decrease. Brick ‘n mortar stores, from major chains down to independent retailers have increased their emphasis in online sales but they are not keeping pace with their non-store competition. In addition to not being as experienced in this market, another handicap that they often faced was that consumers were required to pay local sales taxes on purchases in any state in which the seller has a physical facility – retail outlets, offices or a warehouse/distribution center. No change in this for 2017, but in 2018 the U.S. Supreme Court reversed a previous ruling so the future competition may take place on a more level playing field.

The E-Commerce share of their total $ increased for 8 of 11 channels. Miscellaneous and Auto Parts stores both maintained their share but Health/Drug Stores loss ground. The single biggest gainer was Electronics/Appliances, +2.3% in share. The internet is a great place to shop for electronics. Two other significant gainers are General Merchandise (+0.7%) and Food & Beverage stores (+0.3%). These 2 channels account for 28% of the $5 Trillion retail market so any increase is very significant. Plus, there are undoubtedly more gains in E-Commerce still to come from these retailers.

Of particular interest to the Pet Industry are Miscellaneous Stores, which includes pet stores. While they ranked 5th in total E-commerce sales $, they finished in 2nd place for brick ‘n mortar channels in terms of the E-commerce share of the total channel’s business. The commitment to E-commerce is still strong in this channel.

Also note, traditional mail order and TV are not dead. They still account for 32% of the sales of all non-store retailers. However, it is E-commerce that is changing the retail marketplace and sales growth is still strong:

In this rapidly evolving environment, retailers must either adapt or face extinction. It’s their decision. 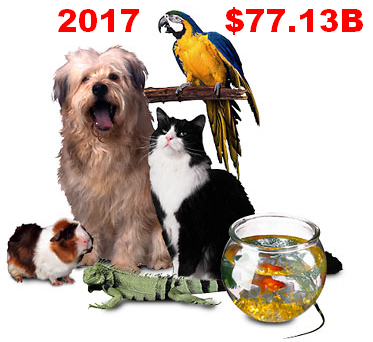 In 2017 Total Pet Spending in the U.S. was $77.13B, a $9.84B (14.6%) increase from 2016. There was almost universal good news. The movement to Super Premium Foods made a deeper penetration across demographics. Deflating prices in the Supplies Segment spurred spending. Veterinary prices had record low inflation which increased spending AND visit frequency. The only “bad” news came from a minor decrease in Services spending. Increased competition saw consumers shopping for value. Their purchase frequency on Services was up a bit. They just paid a little less. Trading $ between segments was not a big factor in 2017. Food had a big turnaround. Supplies and Veterinary built upon a spending increase that began in 2016. Only Services was down, for the first time since 2010. Here are the $ changes:

Let’s see how these numbers blend together at the household level. In any given week, 28.4 Million U.S. Households (1/5) spent money on their Pets – food, supplies, services, veterinary or any combination – up from 27.1M in 2016.

Now, let’s look at the recent history of Total Pet Spending. The rolling chart below provides a good overview. (Note: All numbers in this report come from or are calculated by using data from the US BLS Consumer Expenditure Surveys – The 2016 & 2017 Totals include Veterinary Numbers from the Interview survey, rather than the Diary survey due to high variation) 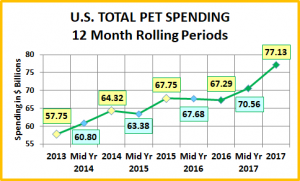 Income Recap –  The #1 driver in consumer spending behavior is value. VALUE = QUALITY + PRICE. 2017 was a year of great Value in the Pet Industry. All four industry segments matter to Pet Parents and income is the most impactful demographic in spending so it often comes down to “price”. In 2015 we saw a strong move to high priced Super Premium Pet Foods. By 2017, the price had come down so the movement spread. 2017 also saw deflating Supplies prices, a record low inflation rate in Veterinary Services and extraordinary retail competitive pressure in Services. All of this “price” pressure served to substantially increase the “value” in every segment. U.S. consumers recognize and respond to Value. In  2017, they did…in a big way in Pet Spending…across all income groups!

All groups spent more but the groups over 35 led the way with double digit increases.

Age Group Recap: 2017 was a great year for the Pet Industry and the good news was widespread. Although the groups over 35 had the biggest increase, all age groups spent more on their Pets. There are two lower profile groups that deserve some special recognition and they are years apart. The 65>74 year olds were the only age group to have an increase in every industry segment. Plus, we can’t forget the youngsters. The under 25 households are the only age group to increase Total Pet Spending every year since 2014.

Even the few decreases in spending for individual segments were not primarily due to less frequent purchases. Consumers just spent less in a market “ripe” with great values.

Finally, let’s take a look at some Key Demographic “Movers” for 2017.

2017 was a spectacular year for the Pet Industry and the good news was widespread. This is immediately apparent from the chart. 7 of 10 demographic categories had no segments that spent less on their Pets in 2017. It gets even better. 87 of 92 individual segments (94.6%) increased their Total Pet Spending.

Many of the winners, like high income, managers, 2 people H/H’s, married couples only, 55>64 year olds and white, not Hispanics are familiar names in the winners’ circle. The same is true on the losing side for under $30K income, renters, center city, singles and married couples with an oldest child under 6.

There are two surprise winners, which further emphasizes the wide ranging impact of the spending lift. Specifically, 2+ person households with only one earner are usually under financial pressure. By the same token, high school graduates with some college are also not usually in the highest income tier. Both of these segments usually don’t have an excess of disposable income, but in 2017 they found some and generated the biggest Pet spending increase in their category.

On the “down” side, there is only one unexpected losing segment – self-employed. This high income segment had a bad year. In fact, they had the biggest spending decrease in 3 of the 4 industry segments. However, they had 8.9% fewer households, which was a big factor. Center City also came in last in 3 segments, but their only decrease was in Services.

6 of the 10 Total Pet winners had the biggest increase in 3 categories. Only 2 person households owned the top spot in all industry segments. With no human children, their focus and spending naturally turns to their pet children.

On the other side, Asians had small decreases in Food and Services but didn’t finish last in any individual segment. However, when you add up all their numbers, they had the lowest increase in Total Pet Spending.

As we noticed early on in our analysis, the key to the Pet Spending lift was “Value”, in every segment. Super Premium Pet Food was available at attractive prices. Pet Supplies Prices deflated, which always spurs consumers to spend more and more often. Veterinary prices, which have been strongly inflating for years fell to a record low rate. People not only spent more Veterinary $ but their frequency was significantly up. Services had a minor spending decrease. This came from the retail competitive pressure as the number of outlets offering services increased. Consumers maintained their frequency of visits but many got a “deal”.

What about 2018? If much of the big lift was driven by lower or “more acceptable” prices in every segment then the CPI could be a major factor. Through September of 2018, Pet Food prices have remained essentially stable. Veterinary prices have moved up to a more “normal” inflation rate. However, prices in both Services and Supplies turned sharply up in the second quarter. In general, this does not bode well for spending. However, it’s the pet industry. We’ll just have to wait and see.