We’re just coming off another exciting and record setting Global Pet Expo so it seems like the right time to slow things down a bit. Usually the perfect subject to do that is the Consumer Price Index. The annual small fluctuations can have an impact on spending but they don’t generate headline news…usually. However, we are in the Pet Industry so we have learned to expect the unexpected and in terms of Petlation, the 2017 results were definitely unexpected.

The inflation rate for Total Pet in 2017 was only 0.4%. This is the lowest rate recorded since they began keeping records back in 1997. It even beat out the 0.6% rate in 2010 which was driven by the Great Recession. Every segment contributed and deserves a headline:

Let’s put these changes in perspective. As we look back over the years since 1997, there seems to be 3 distinct periods in which the inflation rate for each segment had a similar trend. The periods are of varying lengths and some segments took the trend to a far greater extreme.  We’ll look first at the overall inflation from 1997 to 2017 then these periods:

Overall 1997 to 2017 – As usual, the service segments and the product segments seem to almost be in a different industry. This produces a Total Pet that seems perhaps a little high, but not unreasonable. Supplies and Veterinary are at the extreme ends of the spectrum. Pet Food looks like the most rational of the group. Let’s do a direct comparison with some categories outside of the pet industry over the same period to put these numbers in perspective:

1997 to 2007 – Pet Owners became Pet Parents during this time and towards the end of the period took this a step further to more humanize their Pets. The CPI for the product segments had a reasonable rate of increase which worked for Consumers, Retailers and Manufacturers. The inflation in the service segments was abnormally high, especially in Veterinary. However, Pet Services has always been more dependent on higher income so these households were less impacted by the rising prices. Veterinary Services were viewed as a need so Pet Parents continued to spend their money.

2007 to 2009 – This is a 2 year period in time where a combination of circumstances created the highest Petflation rate in history. First and foremost was the Melamine recall in the Pet Food Segment. Consumers feared for the safety of their pets and demanded that Pet Food be made in the USA to insure safety. They later upped this demand to all ingredients must be made in the USA. This resulted in a radical increase in production cost and retail price – over 20% in just 2 years. However, Pet Parents just spent the money. It was a matter of the safety of their Pet Children.

This was also a very flush time in the U.S. economy as well as in the Pet Industry. We can do no wrong was the attitude. The price increase rate for services increased by 33% to 4.8%. Even the already astronomical Veterinary price increase rate moved up to almost 6%. However, the Supplies segment saw the average annual CPI increase almost triple, from 1.2% to 3.1%. There is no true explanation for this one, except, perhaps. Raise the price. They will pay it. Then came the great recession and the aftermath/recovery.

2009 to 2017 – Total U.S. Consumer spending fell in 2009. The last time that this had happened was in 1956. Prices in the overall market also dropped in 2009 as Retailers scrambled to recover lost $. The impact in both Pet Spending and pet pricing didn’t occur until 2010 but it has been ongoing. The Product section has seen the most turmoil in pricing. Food prices have deflated in 4 of the past 8 years giving Pet Food an annual CPI rate of 0.6%, about 1/3 the rate of the “normal” years from 1997 to 2007. Pet Supplies pricing is actually down 5.3% since 2009 as 5 of 8 years have had deflating prices. For the record, Pet Supplies prices officially peaked in September of 2009. Even the Service segments are feeling the effect. The CPI increase of both service segments is down significantly from past years. Let’s take a look at our outside comparison for this period.

The period from 2009 to 2017 has been a time of change and in some cases, a time of turmoil regarding pricing in the Pet Industry. The next chart shows the annual change in CPI for all segments and Total Pet. It should help put this pricing “evolution” into better perspective.

We have tracked the annual changes in inflation from 2009 to 2017. In 2016-17 the CPI dropped sharply. To determine when this trend started, we noted the CPI changes by quarter vs the previous year. Suggestion: Follow 1 color at a time. 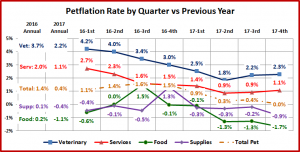 The annual Petflation rate for every industry segment dropped in 2017 versus 2016. The Service Segments’ CPI rate was reduced by almost 50%. However, The Product segments turned a minimal CPI increase in 2016 to Price deflation in 2017 as both went negative.

There are some similarities in the pattern for the two Service Segments as they both reached the low point in the second quarter of 2017 and then turned up slightly. By the final quarter in 2017, their inflation rate had been cut in half from the first quarter of 2016.

The Product segments also had some similarities. They both had a major quarterly pricing lift, although the Supplies segment was delayed by three months. Both spent almost every quarter below the pricing of the previous year and the biggest dip occurred in the final quarter of 2017. Let’s review each segment.

So why track the CPI change? Because changes in prices can and do impact Consumer Spending behavior. In our analysis of the demographics of Pet Spending, household income was the single biggest factor affecting the results. Money Matters Most. This price sensitivity has grown since the Great Recession. High inflation in Veterinary Services has resulted in spending cut backs by the more price sensitive groups. The Services segment has so far been unaffected but perhaps that time has come. The Food segment has gotten around this issue through a succession of upgrades in quality and price. The Supplies segment is incredibly price sensitive and desperately needs some “must have” innovations. Hopefully we will come to a middle ground in Petflation that works both for consumers and industry participants.