SuperZoo 2017 is only a month away. While it is held in Las Vegas, attending or exhibiting at SuperZoo is no gamble. It’s a sure winner. Along with Global Pet Expo, SuperZoo is a “must do” if you want to be a player in the U.S. Pet Market.

As we have noted before, there are slight differences in the two shows. GPE essentially started the U.S. Pet Industry 59 years ago with their first trade show put on with 17 exhibitors and 30 total booths. It still definitely has a larger worldwide following with over 200 exhibitors from outside the U.S. Of course, the “big guys” all attend but so do the “little guys” as it has welcomed a huge number of Independent pet store attendees into the fold.

SuperZoo has grown tremendously from its roots as a regional trade show for independent Pet Stores. Independents are still its largest share of attendees, but it has also broadened its scope with an emphasis on the fast growing grooming services segment. However, make no mistake. All the “big guys” will be there too and its worldwide impact is also growing as over 100 exhibitors are from outside the U.S.

Let’s take a closer look at what you will see at SuperZoo 2017 compared to last year. Before we get started we need to take note of a “behind the scenes” trend that had an impact on the exhibitor count at this year’s show. As we all know, both GPE and SZ are now huge. Apparently, the SuperZoo exhibitors felt that they needed bigger booths to capture the attention of attendees so they upgraded in size…by almost 20%. The SuperZoo staff managed to add 17,000 more square feet of booth space but that was not enough. They needed floor space which simply was not available in the convention center. This resulted in a drop in exhibitor count and a big unfulfilled waiting list. They have remedied this situation for 2018 by moving the show to a different date when additional floor space is available. However, when we look at the various exhibitor categories we should place greater emphasis on changes in share of space rather than just count. This will give us a better read on trends. Let’s start with some overview numbers then a look at floor sections:

Now let’s look at the Exhibitors by type, including animal.

Let’s take a closer look at the “royalty”. Here are the top 10 Dog and/or Cat Categories at SuperZoo 2017.

Make no mistake. SuperZoo 2017 is still huge and offers a wide choice of exhibitors across all the Product Categories. Remember just 2 years ago the Exhibitor count was under 1000. The impact from the decrease in small booth exhibitors was born by the Special Floor Sections, especially Rodeo Drive and Critter Alley/Aquarium Terrace. The exhibitor types and product categories actually remained relatively stable in share. The biggest gainers were Dog and Cat Products, especially Food , treats and Meds/Supplements. However, only 5 of 32 Dog and Cat Product Categories lost any share and those losses were minor. The most significant loser in the exhibitor type section was Gifts/General Merchandise.

Finally, there are a few Dog/Cat categories outside the Top 10 with significant movement in Exhibitor count.

The chart below details the specifics for all 32 of the Dog/Cat product categories that I defined for the Super Search Exhibitor Visit Planner.  (Note: The SZ 2017 Super Search will be released in early July.) All the data inputs for this report and the Super Search were derived from reviewing the SuperZoo online exhibitor product listings AND then validated by visits to over 1000 websites and numerous separate internet searches. They’re not 100% accurate, but pretty close.

Changes of special note from 2016 are highlighted. Which categories are of interest to your business?

TAKE A LOOK. I HOPE TO SEE YOU IN VEGAS! 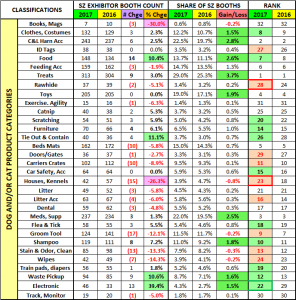 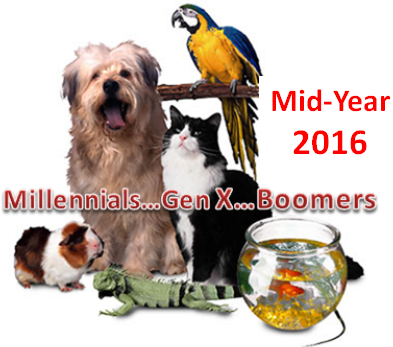 In this report we will update Pet Products Spending for perhaps today’s most popular demographic measurement – by Generation. Are the Baby Boomers still spending like they used to? What about Gen X? They are next in line. And the Millennials, the hope for the future, are they making progress to eventually lead the way? The numbers come from or are calculated from Data in the US BLS Consumer Expenditure Survey. 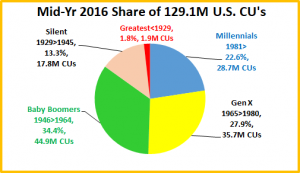 There is the obvious difference in age to be considered and differences in behavior. However, we have also learned that there are key Consumer Unit characteristics, like income, family situation and home ownership that make a difference in Pet Spending. Let’s look at some of these key differences.

Next we’ll compare the Generations to the National Avg. :

The Total Spending increase was all due to Boomers. Now let’s look at individual segments. First, Pet Food..

We are still seeing the residual effect of the Boomers 2015 Upgrade. 2016 is not starting off well as there is some pull back on the upgrade and only Millennials are showing plus numbers for the 1st half. Now on to the Supplies Segment.

It appears that the steep drop in spending during 2015 could be coming to an end. Sales in the first 6 months of 2016 were down only $0.06B and essentially were flat versus the same period in 2015. Boomers and Gen X, which account for 70.5% of all Supplies Spending, both mirrored this trend. We’ll see what the 2nd half of 2016 brings.

In the final chart we will look at the spending performance of each generation. We will compare their share of spending on Total Products, Pet Food and Pet Supplies to their share of CU’s and see “Who is earning their share?”