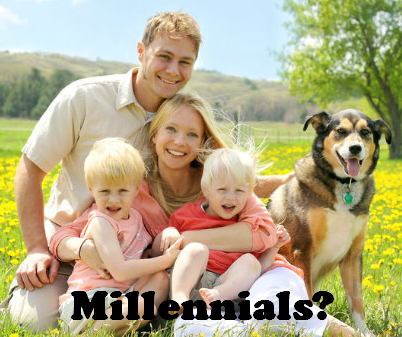 Generations have become a very “high profile” subject in our society and Millennials are by far the “lead” story. One thing that I have noticed is that we tend to “lump” them into one homogenous group. The Millennials are the largest, best educated and most technologically savvy group in the history of the world. They share many behavioral traits but in 2015 they ranged in age from 18 to 34, which can lead to some distinct differences.

For example: Two 24 year old “buddies” sharing an apartment, a newly married 28 year old couple looking to buy their first home and a 33 year old couple who own a nice 4 bedroom home in the suburbs and are expecting their second child…are all Millennials. Believe me, there are differences in their spending behavior.

While Generations share the same “world”, my research has shown that over a lifetime consumers reach key waypoints and go through “stages” which strongly affect their behavior. This is very noticeable in the developing years, as they are “setting the stage” and in the declining years as they approach and enter into retirement.

In 2015 the Millennials were definitely in various stages of development. With perfect timing, our friends at the US BLS produced a special, supplemental report to their Consumer Expenditure Survey. The report has a different division of age groups from their regular Age report. By melding the two reports together, I was able to generate base data and calculations for 3 distinct groups under age 35, covering all the Millennials. Specifically:

In some data you may note a slight difference from my earlier Generations report. This is primarily due to the fact that when you ask someone their current age, it depends on what time of the year you ask. Ex: Last week I was 67. This week I am 68. The difference in data between the 2 reports is 1.4% or less so it is not significant for our purposes. Let’s get started with each group’s share of the under 35 financially independent Consumer Units. 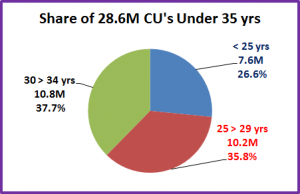 First: Size of the CU, # of Earners, # of Children under 18…and of course Homeownership

Now we’ll show you the money with income and spending.

In 2015 the <25 group spent 0.64% of their total spending on their pets. This is 67% of the national average of 0.94% and is in line with the numbers over the last 30 years. That is not the case with the 25>34 group. There is good news with the 25>29 year olds. They appear to be adding pets to their households and spending in line with at least the Gen X group when they were this age. The 30>34 group is extraordinarily low and pulls the numbers down for the 25>34 group to 0.74%. This is 78% of the of the national pet share average. Gen X occupied all of the 25>34 age group for 10 years and averaged between 80>90% of the National average. Boomers actually exceeded the national average when they were in this group. Admittedly, this was the Millennials’ first year to occupy all slots in the 25>34 age group. We’ll have to see how they progress.

Now we’ll get Pet Specific with spending by industry segment. 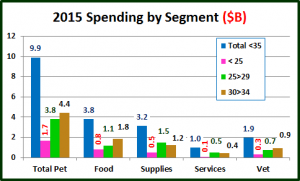 Finally, here’s a look at the Performance of the 3 age groups in relation to each Industry Segment.

Millennials are defined by birth years and a shared “world experience”. However, their spending behavior, including pet, evolves as their life unfolds. A significant share have become Pet Parents. Their <25 group has been spending on par with earlier generations. Their first year of “controlling” the 25<34 group was not equal in performance to past generations. We’ll see if they improve. Age 35>44 has been a true “turning point” in Pet Spending. Prior to 2011, this age group always spent more than their “share” on Pets. With the youngest Gen Xers, it has fallen to 90+%. Millennials begin to enter this age group in 2016…