The U.S. Retail market reached $5.3 Trillion in 2015 from all sources – Supercenters, Restaurants, Online retailers, even Pet Stores. This year’s increase of $118B was less than 2014’s $196B and was driven down by a 19% drop in total Gas Station revenue. (Data courtesy of the Census Bureau’s Monthly Retail Trade report)

In this post we will try to narrow the focus to the top 100 Retailers in the U.S. Market – the headliners. These 100 companies account for 38% of the total retail market! How did they perform in 2015 vs 2014…and of course, which ones sell Pet Products? Remember, according to the 2012 Economic Census, over 2/3 of the Pet Products in the U.S. are sold outside of Pet Stores. The Top 100 group accounts for a huge share of these sales. This report is crammed with data, but we’ll try to break it into smaller pieces with regular observations. All of the base data on the Top 100 comes from Kantar Research and was published by the National Retail Federation (NRF).

The Top 100 is obviously critically important, and as expected it’s outperforming the overall market. We need to remember that this “Top 100 club” is in fact a contest. Every year companies drop out and new ones replace them. This can be the result of mergers, acquisitions or simply slumping sales. Changes of note in 2015:

Now let’s start “drilling down” on the Top 100. Here’s a summary of Regular and Online Retailers versus the bundled total for Restaurants & Gas Stations

The Business for retailers selling pet products remains strong. We also should remember that these store count totals are only for the Top 100 and include only 1 Pet Chain and 1 Farm Store Chain, as they were the only companies to make the list. Pet Products are sold in thousands of other retail outlets – 20,000 more grocery stores, 10,000 more pet stores, 16,000 Vet Clinics plus…. A reasonable estimate would be 200,000 outlets selling pet products.

In the next segment we will look at the detailed list of the top 100. We’ll sort it by retail channel with subtotals in key columns. We’ll then break it into smaller sections for comments. At the end of the post there will be a download link for an Excel file with the data. This will allow you to sort it as you choose…by rank, alpha, pet/nonpet…it’s your call. 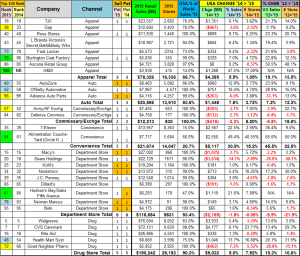 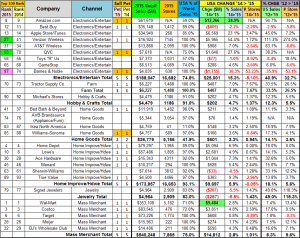 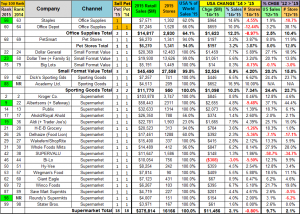 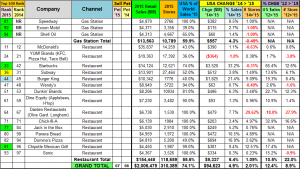 Although restaurants & gas stations aren’t relevant in terms of Pet Products Sales, they are relevant in our daily lives. Most of these restaurants are fast food…plus coffee shops. Also, remember that when fuel sales at Gas Stations are more than 50% of the total, they are not counted in qualifying for a Top 100 sales

Retailers earn their spot in the Top 100 by producing big numbers so it’s not surprising that their overall performance was strong, +4.9% compared to +2.3% for Total U.S. Retail.

Pet Products are an important part of the success of the Top 100. Sixty-seven companies on the list sell Pet Food and/or Supplies. Their Total sales exceed $1.7T in 134,800 stores and online. Obviously, this is a hugely important group to our industry whether you are a manufacturer trying to capitalize on their consumer appeal or a retailer trying to succeed in a very competitive marketplace. Do the math. If we take out PetSmart’s $6B and the remaining companies generate only 1% of their sales from Pet, we’re looking at $17B in Pet Products sales from only 66 sources…and 1% is low for this group.

The Top 100 is also evolving, just as we are seeing in the Pet Industry. Acquisitions, mergers, everyone is trying to find a formula for success in a highly competitive environment. To survive and prosper you must adapt.

We’ll wrap up this report with a few “Funtastic Facts” about the performance of the 2015 Top 100:

Now, I suggest that you take a closer look at the Top 100 Excel file, find your own “funtastic facts” and see what is relevant to your business.

Both shows are all about Pets so there are shared features but there are also definite differences. In this report we’ll compare the two shows in terms of exhibitor type and product offerings – the attendees’ view.

The history and focus of SuperZoo is the independent pet retailer. It always has been. If you remember the old days in Long Beach, you appreciate the great job that the WPA has done in building this “retailer” show from a regional event to a national “happening”. The influx of attendees from other major retail channels and foreign countries is largely due to the spectacular growth and allure of the U.S. Pet Industry. People from around the U.S. and around the world are interested in what’s happening…right now, in the U.S. Pet Market.

Global Pet Expo obviously is the foundation of the entire U.S. Pet Industry and quite frankly, the World of Pet, so it is aptly named. It has only been in recent years that independent pet retailers were invited to attend. The show has also developed such a large international following in attendees and exhibitors because of the spectacular success of the U.S. Pet industry. Everyone wants a “piece of the action” or to emulate the success in their own country…or both! It is the “major leagues” and the show of the U.S. Pet Industry.

While both shows are the “best” at what they do, they are evolving and in many ways moving towards one another. With 200,000 outlets in the U.S. and the internet selling pet products, the number of independent pet stores is not growing. SuperZoo sought to broaden their reach by appealing to the fast growing service segments, especially groomers and also welcomed all retail channels to their party.

With corporate consolidation a way of life in the U.S., GPE welcomed the independent pet stores into the GPE fold and further enhanced their international mix. This significantly increased the participation at the show, in both attendees and exhibitors. GPE is “the” Pet Party. If you’re anybody in the U.S. Pet Industry or want to be…then you better be in Orlando!

Now, let’s take a look at some specific comparisons. The first chart is about exhibitor booth count and special themed floor sections. Both shows have 5 “themes”. You will immediately note the similarities and differences. 3 – Shared; 1 – Similar; 1 – Completely different.

Now, let’s compare the shows by exhibitor “type”, including the type of products by animal.

Next we’ll look closer at Dog and Cat. The top 10 product categories in terms of number of exhibitors are the same for both shows. There are just a couple of differences in rankings.

Next is a chart comparing the 2 shows in 32 Dog & Cat Product Categories. Categories with more than a 2% difference in share of booths are highlighted. 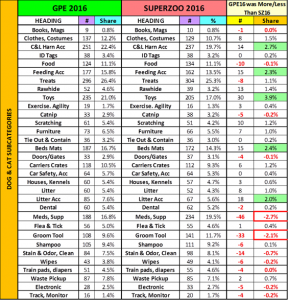 Although there is a “core” group of attendees at both shows, the shows do have a slightly different focus, which they clearly state – upfront. SuperZoo is “The National Show for Pet Retailers” and GPE is “Global” Pet Expo. This affects both the type of exhibitors and the audience that attends. Because Pet Retailers are the largest share of their audience, SZ booths have a higher number of distributors as well as exhibitors with business services, gift products, or items relating to grooming services.

Global Pet Expo – the name says it all. Exhibitors and attendees flock to Orlando from around the world.

Both shows are filled with people trying to get a bigger share of the consumers’ Pet Spending $. Over 650 “key” pet companies do both shows. This means that every pet product category is extremely well represented in Las Vegas and Orlando. However, new products, new companies and new ideas happen almost every day in the Pet Industry. Over 1000 of the total exhibitors only did one of the shows! This is why, despite their differences, both shows draw attendees from every retail channel and from around the world.

Global Pet Expo is only 7 months away. See you in Orlando!