The spending on Total Pet Services in the U.S. is $20.85B. This is down -$1.15B (-5.2%) from a year ago. These figures are based upon data published in the USBLS Mid-year Update of their Consumer Expenditure Survey. As we saw in the Pet Products update, the story is complex. We will take a closer look at each of the two Service Segments – Veterinary and Pet (Non-Veterinary). Let’s start with the good news.

This chart should put that number in perspective with recent history: 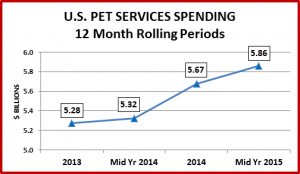 Flat…then trending up. This chart gives a good overview. Let’s do some direct comparisons of like time periods.

Let’s take a look at the Services spending numbers by Age Group: 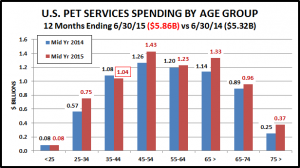 Pet Service Spending can be a convenience or as in the case of aging Pet Parents, a growing need. The bulk of the spending in this segment is discretionary. Therefore Income is a big factor. In fact 34.9% of the H/H’s, those over $70K in income, account for 68.1% of the spending. Moreover, the over $120K income group, 14.4% of H/H’s spend 37.4% of Total Pet Services $.

Although prices have increased in this segment considerably above the national CPI average for years, thus far the consumer demand has been largely unaffected. This could be because the bulk of the business is coming from high income groups and the increases were relatively insignificant in terms of their overall spending. However, we saw a significantly smaller increase in spending in the first half of 2015, when prices increased by more than 3% for the first time in 3 years. We also saw a decrease in spending from $50K>$80K income group in the Mid-year numbers. These could be anomalies or it could be that the increasingly price conscious U.S. consumers were sending a first message. “There are limits.”

NOW ON TO THE VETERINARY SEGMENT!

Veterinary Spending turned sharply downward in the first half of 2015, after a huge increase in 2014. This chart should help put these trends into perspective. 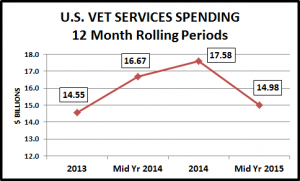 A rapid climb that slowed, then a steep drop. Let’s compare like time periods.

The prices of Veterinary Services have been increasing at an extraordinary annual rate – 5% since 1997. This has recently slowed, but is still 3.5% since the recession. Inflation has affected the spending of most lower income groups. The big spending increase in 2014 came primarily from two demographics – over $120K H/H income and the 55>74 age group. The Jan>Jun 2015 drop was huge -$2.6B. Let’s look a little deeper. First, by Age Group 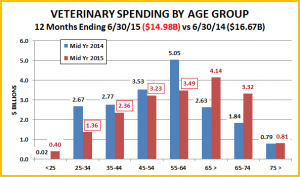 Let’s take a look at Veterinary Spending by Income Group

We generally consider most Veterinary expenditures as “need” rather than discretionary spending. Regular Veterinary care for their companion animals is a responsibility of Pet Parents. However, non-emergency services may be becoming more discretionary to the consumer. The extraordinarily increases in Veterinary prices over a number of years has caused many of the lower income groups to delay or even forgo services. This was evident in 2014 when an overall $3B increase included a $1B drop from H/H’s with income less than $50K.

It appears that we have 2 opposite trends in the overall Services group. Pet Services spending, which has generally been considered discretionary and very dependent on income, is showing increased spending based upon “need” with the aging of the huge group of Baby Boomer Pet parents. Veterinary Services, at least the non-emergency portion, which has been considered “need” spending is moving to a more discretionary nature due to years of extraordinarily high inflation and the increasing price consciousness of U.S. consumers. 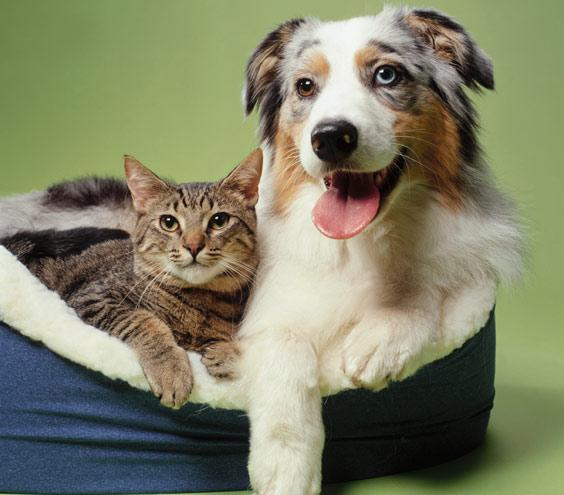 The USBLS just released their Mid-Year Update of the Consumer Expenditure Survey covering the period 7/1/2014 to 6/30/2015. As you remember from an earlier post, Pet Food had a great year $26.7B…up $3.8B, but what about the other “Pet Products Partner”…Pet Supplies? Pet Products account for 67.1% of Total Pet $. What happened in the Supplies segment?

This most recent report shows Pet Supplies Annual spending at $15.85 B, down slightly from a year ago (-$80M). The first chart will help put this decline into perspective with recent history. 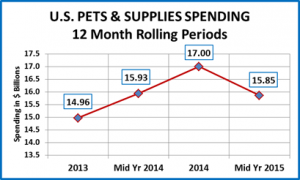 The rolling 12 month totals gives a good overview of the recent up and down trend in Pet Supplies Spending. However, for the best comparison, we should look at like time frames: 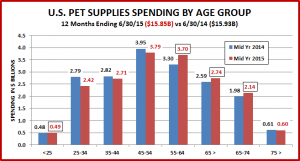 The look at Supplies Spending by Income Group seems to validate our observation of extreme price sensitivity in this segment. Let’s take a look at this on these two correlating charts.

This is a small sample. More research is needed and like almost everything we look at, I’m sure that the situation is more complex than it appears on the surface. However, this segment has been deflating since 2009 and this is a strong indication that a growing number of categories in the supply segment are becoming commodities. A recent report by Blackhawk Engagement Solutions of U.S. women’s shopping behavior found price (75%) as the #1 factor in purchase decisions, followed by quality (55%) and brand (31%). It appears that the Pet Supply segment is reflecting these National trends.

Inflation and deflation have the opposite effects on Food & Supplies. Slight inflation generates more Food Spending. If prices fall, people just spend less. On the other hand, Supplies have become so commoditized, that even small price increases seem to depress spending. On Supplies, Consumer’s want a deal! It is definitely a complicated situation!

NOTE : I have consolidated this report with the earlier one on Food into a PET PRODUCTS SPENDING UPDATE. If you would like an electronic copy, just send an e-mail request.

Cinco De Mayo seems like an appropriate time to do a brief update on Pet Spending by U.S. Hispanic Households. I wish there were better news to report but we’ll drill deeper to see what is causing this steep drop. The numbers  in this report are computed from data in the Consumer Expenditure Survey conducted by the USBLS.

Additionally, while their H/H Income (79%) and Spending (85%) are below the U.S. average, both increased slightly faster than the average household. Financially, they are slowly gaining ground. However, Hispanic H/H’s only spend 0.5% of their total expenditures on Pets, compared to the U.S. average of 0.9%. Now, let’s take a look at their recent history of Pet Spending.

This chart should give an overview of Total Pet Spending since 2013. Remember , when making direct comparisons using a rolling chart, it is best to use similar time frames. Ex: 2014 vs 2013. 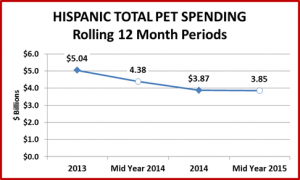 Any way you look at it, a change of 1 year brought a big drop in spending. Let’s use the same type of chart to get an overview of the Hispanic spending in the individual industry segments. 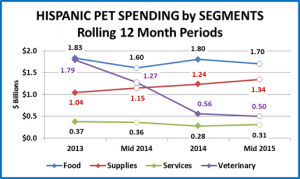 Now let’s take a look at the Hispanic Spending in the Mid-Year Report by Industry segment. This chart compares the latest Mid-Year numbers versus the same period a year earlier.