As you may recall from a Post that I did last Fall, Pet now has its own listing in the Consumer Expenditure Survey conducted by the U.S. Bureau of Labor and Statistics.
Recently, they published a mid-year update. This is a “rolling” report covering the 12 months ending June 2014. The full year for 2014 will be published in September, which will give us the first opportunity for a direct year to year comparison. However, this update also covers 12 mos and shows us the market direction.
In conversations with the personnel who conduct the survey I found out that there is more detailed data which is not published but available if you know what to ask for and who to ask. So here’s what I got:
Total Pet expenditures per household (published) plus 4 subsets:

They provided details for income groupings of $5-20K each from less than $5K to over $150K so the data can be broken in a huge variety of groups.
Their data is only published in terms of expenditures per household – Pet & NonPet together. They also don’t generate total Retail $. Getting these Retail totals is more complex. You must consider how the information was gathered – by quarterly interview or weekly diary. With this knowledge, I developed a formula to turn their annual expenditure numbers into Total Retail $ per category for each product and income segment.
The specifics for Consumer Pet Spending for the 12 months ending June 2014 are in the table below. WARNING: This is going to get somewhat complex. We’ll try to simplify it somewhat with some basic graphs and charts and some “smoking gun” observations. At the end we will provide you with additional detailed data including:

You can then make your own comparisons in the specific areas that are of interest to your business. 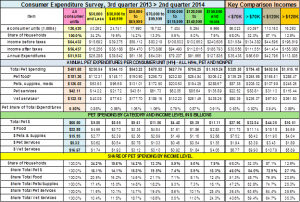 Here are the overall numbers and the change between Midyear 2014 and the 2013 Full year report.

The difference in the percentages between Households and the total market is due to the increase in the number of households. For this analysis we will focus on the spending in the total market and more specifically the changes. Here’s where the $3.05B comes from in terms of category. 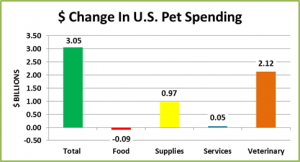 Once again, let’s focus on the $ change…for each income segment.

Here’s what it looks like side by side on a graph: 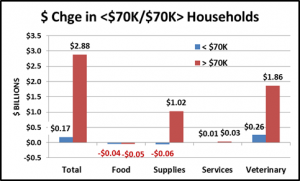 This huge difference in performance suggests a deeper analysis. Let’s look at some details in the under $70K group:

Since 94+% of all the growth is coming from households with income above $70K. We definitely need to take a closer look at the spending at higher income levels.

In reviewing the detailed data, one fact can’t be ignored 109.2% of the overall $3.05B increase came from households with income above $120K. 12.9% of U.S. households are driving the increase in Pet Spending. Let’s follow the money and set up a new income division Over/Under $120K.

Here’s what they look like side by side on a graph: 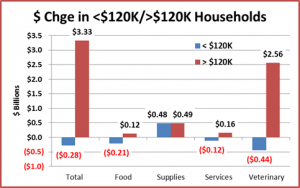 Thanks for your patience in “wading” through this complex subject!

As promised, a 2 page detailed Appendix is available through the link below. Just click on the button to download and save the file as a PDF.

When we took a look at 2014 Pet Industry Sales in a recent post, we found a lot of overall positives – 83.1% of the growth was real and inflation was only 0.68%, the second lowest in history. However, when we looked a little closer, we found these “positive” numbers came from combining 2 potentially negative situations.

The service side of the business, especially Veterinary had a continuing high inflation rate which has limited growth in the actual amount of services sold over the last 5 years. While Supplies and now Food were showing deflation – usually a sign of commoditization and not a healthy situation for any segment.

December brought a surprise price increase in both Food and Supplies. Let’s take a look at what has happened since. 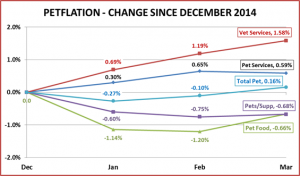 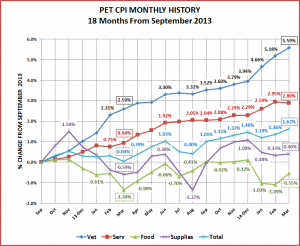 March of 2014 was the pricing “low point” for the industry in 2014. We are about 1.6% above that level this March. All segments are above the pricing of a year ago. There is also a little encouragement in the Food and Supplies segments. While the monthly pattern doesn’t exactly match a year ago and some monthly drops have been precipitous, the duration of the declines appears to be shorter.

Veterinary Services – One has to wonder when this segment will at least slow down in price increases. 2011 and 2012 showed actual decreases in the amount of Veterinary Services sold and the annual adjusted growth rate since 2010 has slowed to 0.9%. Yet the price increase from December to March this year actually exceeded last year. The continuing high prices increases in the Veterinary segment does seem to be having a positive impact – building the OTC Meds/Supplements category in the Supply segment.

NonVet Services – The price increases in this segment have been more moderate – in the range of 2-2.5% annually. So far this has not negatively impacted consumer purchases as the segment continues strong growth. In fact, it has become a big plus for the Pet Store Retail Channel.

Pets and Pet Supplies – Prices are actually above the same period a year ago. However, before we celebrate too much, we should remember that they are still 3.9% below what they were in March 2009 – 6 years ago. The deflation in this segment is an ongoing issue, with no easy fix. It has not been a precipitous drop like what occurred in the Human Toy market years ago. However, with more and more categories becoming commoditized the decline is very real. Since the recession, U.S. consumers have become more value driven than ever before. We need to “make it better” if we expect them to pay more – Innovation!

Pet Food – This largest segment is perhaps the biggest concern. The huge price drop in January – the largest in 17 years – is a pretty good wakeup call. However, retail pet food prices in the last 18 months have largely been below the level of September 2013. Remember, the CPI numbers from the U.S. Government include both food and treats so deflation caused by commoditization is a bit more complex than if it were food alone.

Total Pet Market – Services Way Up – Food & Supplies Down. As we have said, put these 2 negative situations together and they give a somewhat “false positive” read for the overall market. We need moderation in the increases and innovation in the deflationary segments to turn them around. It’s a little early to guess the overall Petflation rate for 2015. However, if the current situation continues, it could very well be similar to 2014 at about 0.64%.

Finally, here’s a chart that compares our March numbers to recent history: 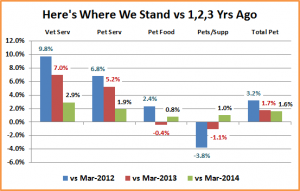 As you can see 2014 was a tough year in the industry from a pricing perspective. We’ll see what the balance of 2015 brings!