2014 brought a 4.16% increase in the total U.S. Pet Industry. This was not quite the projected 5% increase, but even factoring in “Petflation” the increase in the amount of goods and services sold was 3.46%. This means that overall an outstanding 83.1% of the growth was “real”.

In this post we’ll take a closer look at the performance of the total market and its individual segments in terms of Retail Growth and Adjusted Growth, which factors in inflation (The CPI). We will cover 2014 and also put it into perspective for the period from 2009 to 2015.

Here are the details for 2014. Some key data is highlighted:

The Bar Chart below may make it easier to visualize the situation…especially in the Vet Segment. 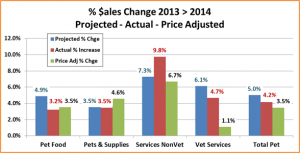 Now let’s take a look at the performance of the individual segments from 2009 to 2015 starting with Food.

The deflation years are the most concerning. 2014 was only the third year with a CPI decrease in Pet Food – 2000 and 2010 were the other two. I don’t know the situation in 2000 but the 2010 deflation came after a combined 20% Food CPI increase from 2007 to 2009 – in the heart of the recession. Real growth ceased. The decrease in 2010 brought a positive response from the consumer – adjusted growth exceeded retail sales.

The years from 2011 to 2013 brought CPI increases in the 2+% range. Interestingly enough it looks like the consumer accepted the initial year of the increases but a 2.8% increase in 2012 and the cumulative effect of the increases dropped the percentage of real increase below 50%. 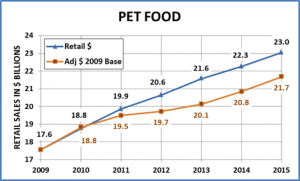 2015 Retail Food sales are projected to increase 3.5% to $23.04B. My initial “petflation” projection for 2015 is (-0.5%). No one, including me likes this. However the Pet Food CPI has only dropped in January 3 times since 1997 (including lastYear) and in both January and February only twice. It has done both in 2015 and the January drop was over 1.1% -twice  as much as either of the other 2 years. Things can change but right now it looks similar or even more extreme than 2014.

Like the Food Segment, the first deflationary year was 2010. However, the story is a little different. From 1997 to 2004 Pet Supplies increased in prices at an annual rate of under 0.5%. Starting in 2005 and continuing through 2009, the CPI increased an average of 2.75% per year. This doesn’t sound like much but remember it was 5 times the rate of the previous 7 years and 2 of the biggest increases (+3.0%) came in 2008 and 2009, the heart of the recession. The consumer reacted – and bought less.

Prices fell almost 2% in 2010 and the consumer bought more. However, unlike Food, the prices briefly stabilized then generally began moving consistently downward. 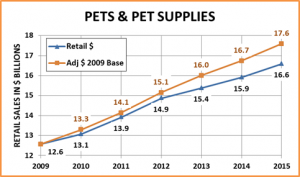 Please note that the price adjusted numbers are always above actual Retail. In terms of 2015, Pet Supplies are projected to increase 4.3% to $16.58 B. At the end of 2014 there was some indication that this segment might be pulling out of the deflationary spiral. However, 2015 has drops in both January and February CPIs. The decrease was a little less than in 2014 so I mitigated my projection to -0.8%.

There are no real negatives regarding this segment. It is growing strongly and consistently, especially since 2011. However, it is a small segment, only accounting for 8.6% of the total market. 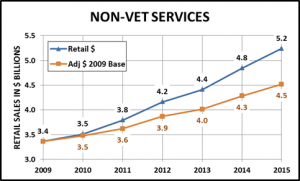 2015 sales are projected to be $5.24 B, an 8.3% increase. This seems eminently attainable. In regard to inflation rate, the average annual rate of 2.5% seems like a reasonable estimate for 2015.

The final individual segment is Veterinary Services. This segment accounts for over 25% of the Pet Market and has had strong retail growth but there is one overriding issue.

We certainly think of regular veterinary visits as a “need” not a “want”. The extreme inflation over the years finally generated a consumer response in 2011…they cut back on veterinary services, turned to OTC medicines, supplements, treatments and home testing. Pet Health Insurance is growing and there may be fundamental changes in Veterinary Clinics – more chains and groups. Major medical procedures and emergency care will always be needed but steps should be taken within the industry to make regular veterinary care more affordable. 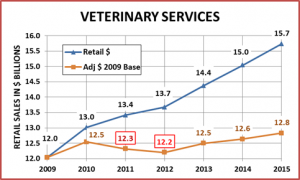 Now in our final section we’ll go back to the total pet industry.

These are the kind of great numbers which attract so many people to the Pet Industry. The retail numbers are also consistently good across the segments. However, when you look a little deeper into “petflation” and the actual amount of goods and services sold, you find that the total industry numbers are generated by two undesirable situations that tend to counteract each other when the numbers are combined. Specifically: 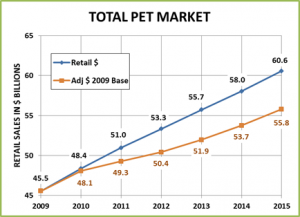 In 2015 the Total Industry is expected to increase 4.2% to $60.59B. It appears that deflation may be even stronger in 2015, possibly producing the lowest CPI increase in history. We need both the deflating and inflating segments to start moving to the middle…..

Finally, to me, the researching and writing of this post certainly reinforced the need for everyone to look below the surface in their business…to understand where the business is coming from and where it may be going.