The CPI data for December is out – and it brought a big surprise… The total pet market prices are up +0.14%. It may not seem like much, but prices have fallen in December in 4 of the last 6 years…and this was the biggest increase since 2007. In 4 consecutive years December has brought precipitous drops in both Food and Supplies prices, driving the Total Pet Market pricing down…but not in 2014! 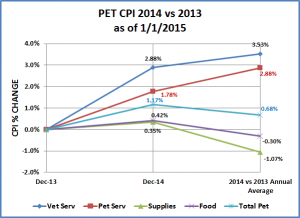 The Total Pet 2014 CPI trended up in the final quarter and finished at +0.68% for the year. This was primarily “fueled” by increases in the Supplies Segment. The Service segments slowed their rate of increase and Food Prices have become essentially flat.

Here’s what the last 16 months of CPI’s look like, using August 2013 as a starting point: 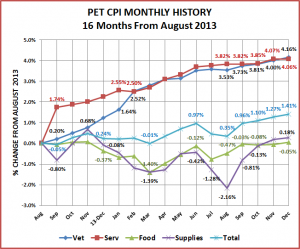 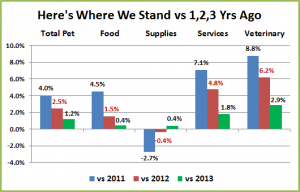 Pet Services – Prices are 1.8% higher than they were 1 year ago. The increases have slowed in recent months. Most of the 2014 price increase was in the first 6 months. Unlike all the other Pet Market segments, Services hasn’t hit a “pricing wall” resulting in slowed consumer purchasing…yet. If it can maintain an annual increase in the 1.8% – 2% range “real” growth in the amount of services should continue.

Vet Services – Prices are 2.9% higher than they were a year ago. However, driven by early, substantial increases, the annual increase was 3.53% – almost a full percentage point higher than each of the last 2 years. Although retail sales have gone up, the actual amount of Veterinary Services provided has been essentially flat since 2010. In the second half of 2014 the price increases slowed considerably. If this segment can keep this “second half model” and annual price increases are in the 2.4% to 2.6% range, “real” growth should increase.

Services Total – Over the past 20 years, the price increases in the service segments have been almost a mirror image and always headed up. In fact, since 1999 the cost of Veterinary and Non-Veterinary services have more than doubled. It’s time to slow down.

Pet Food – Pet Food prices are 0.42% higher than they were a year ago. Although they have generally been down most of year generating an overall decrease of -0.3%. A price decrease in Food has happened 2 other  times – in 2000, down -0.1% and in 2010, down -0.38%. Food Pricing was definitely a roller coaster ride in 2014 right up until October. In the last quarter, prices flattened out and unlike the 5 previous years, there was no December price drop. This largest segment of the market has become even more competitive. With the consumer looking for value, the food segment comes up first on everyone’s comparison shopping list so price is a major issue. It looks like the food segment could support a rise in the2015 CPI in the 1.5% range.

Pet Supplies – Prices went up 0.09% in December, which is miniscule. However, when you consider that prices dropped an average of -1.1% in the last 4 Decembers, it’s is quite a turnaround. The December prices in 2014 are actually 0.35% above what they were in December 2013. Of course, prices overall fell -1.07% in 2014. But it could have been much worse. Before they started up in September, prices were projecting an annual drop of -1.5%. The September increase was a bit extreme at 1.4% but the final quarter brought moderation…and no precipitous drop in December prices. The supplies segment is more prone to seasonal pricing fluctuations so even if it gets back on track, it will never have slow moderate monthly increases. It will always be a “roller coaster” ride. However, if the extremes can be mitigated and the deflation stopped it will be a much healthier environment for all concerned. This segment is highly competitive with a huge number of “players” a CPI increase in the 1.0% to 1.5% range should support healthy growth.

Total Pet – Prices are 1.2% higher than they were 1 year ago in December 2013. For the year, prices were up 0.68%. Only 2010 at 0.62% had a lower increase and actually no other years have been below 1.4%. The consumer products market has become incredibly sensitive to pricing since the great recession. Priced to high and consumers look for alternatives or just buy less. Price deflation can also bring trauma to a market because of the pressure it puts on both retailers and manufacturers. So what is the “sweet spot”? 2014 was not a typical year and we wouldn’t want to repeat it’s wild swings. However, the last quarter of the year, with moderating prices in the service segments and slight increases in the Products side could be a good “role model” for the future. It would seem that an annual increase in the 2015 Total Pet CPI in the 1.5% to 2.0% range would be ideal.

The Holiday season is a critical selling period in the U.S. retail market and December is the most critical month. In recent years, there has been an effort to push the “starting” date earlier. However, these earlier sales don’t occur in a vacuum. In this post we will try to put the November and December Sales in context with the total Holiday Lift…and the resulting yearend total sales.

The best way to do this is visually with graphs so there will be a few more than normal.

As usual, the data is from the U.S. Census Bureau and includes the just released Advanced Retail Sales for December. In this first section, we will take a look at retail sales for November and December of 2014 compared to 2013. 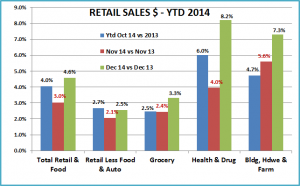 Let’s take a look at other channels, including General Merchandise and the Internet: 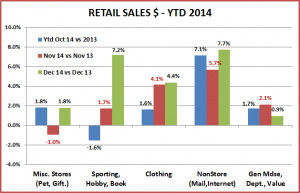 We have looked at December sales vs YTD October and November. Overall it was stronger than November but didn’t quite match the rate of increase prior to the holiday season. We’ll give it a “C-“ Let’s next look at the % of December lift compared to recent years. 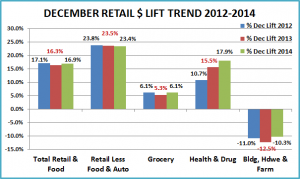 In the next chart we will take a look at Miscellaneous Stores which includes Pet and Gift outlets along with some major channels that are impacted strongly by the Holiday lift. 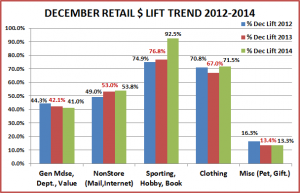 Now let’s pull all the lift numbers together and look at sales before, during and after this year’s lift 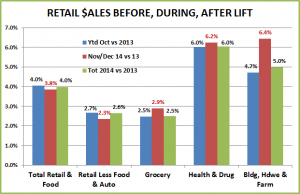 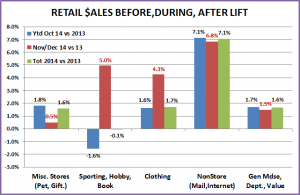 Lets take a look at the total holiday lift trends for the past 3 years. 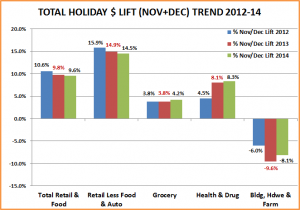 Let’s first put the overall Holiday List in perspective. We are measuring 2 months’ worth of sales which accounts for 16.67% of the available year. The percentage of total sales will vary by channel depending on how much they have come to rely on the lift.

In the last chart let’s take a look at the lift history of some retail channels that are more dependent on the Holiday Season Sales. 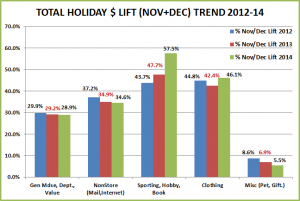 Final Thoughts – The holiday season is a major part of U.S. retail. In general, the lift is slowly but consistently decreasing. Efforts to push the season earlier have worked to increase November sales but at the expense of lowering the lift in December.

The 2014 December sales increase was greater than last year but the combined Nov/Dec increase was not…and both were in the bottom 5 smallest % increases since 1992. Channels doing 42.9% of the total did add to their annual rate of increase through holiday business. Others doing 34.7% lost ground. Overall the “lift” earned a “C-”. Before we can do a final assessment of the total 2014/15 holiday season we have to measure the Jan/Feb “fall” which happens EVERY year.