Why Invest in the Pet Industry?  To answer that question, let’s look at the numbers.

In sheer numbers, America has a lot of pets – 400M – more companion animals than people. According to the APPA there are:

The APPA reports that the % of pet ownership among U.S. Households is:

As expected, Dogs and cats are by far the most popular. Let’s put some of these numbers in perspective: 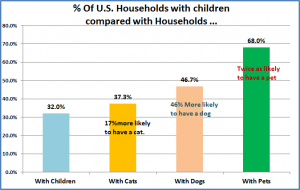 As you can see, Pets are a major part of American life and have become part of the family. However, we are talking about business so how much do Americans spend on their pets?

The U.S. Census bureau just released their annual study on consumer spending which found that the average U.S. Consumer Unit (household) spent $460 annually providing for their pets. That’s for all households – with and without pets. ..and does income matter?  Let’s take a look: 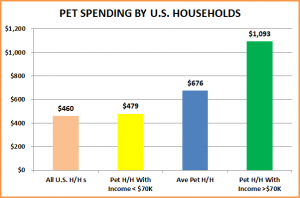 Income does matter as the rate of pet spending  increases radically with an increase in income.

So what is the top line? According to the APPA, Pet Spending in the U.S. in 2013 was $55.72B The U.S. Census Bureau’s estimate is actually higher…$57.95B. Either way, it is a lot of $…and more than is spent on alcoholic beverages (at home), non-alcoholic beverages, dairy products or men’s clothes…to name a few categories that Americans are fond of.

Where do we spend all this money? A review of a recently published list of the top 100 U.S. Retailers from the National Retail Federation is very enlightening. Before we take a look at the summary results, we should note that this report just reflects the top 100 Retailers. It doesn’t include approximately 8000 other Pet Stores and thousands of other outlets selling pet products across many distribution channels.

So how do the Top 100 Retailers feel about selling Pet Products? Let’s see… 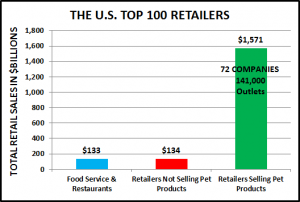 Obviously, Pet Supplies are sold in a huge number and wide variety of outlets…all across America. There is another factor to consider. How important is shopping for Pet Supplies to the U.S. consumer? A.C. Nielsen has done a survey which gives some insight into how the consumer feels and acts.

The Nielsen survey addressed the nature and number of consumer shopping trips. They divided them into 4 segments:

Here’s how the trips broke out. 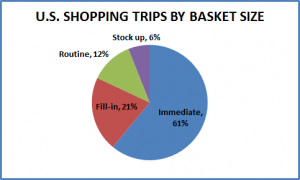 As you can see most trips are smaller – with 82% at $51 or less. Let’s take a look at the immediate trips. These are “need” driven and make up 61% of all of Americans’ “forays” into the retail market. What “needs” motivate these trips?

According to A.C. Nielsen, 9 of the top 10 are for “food”. Ranked in order, the top 10 reasons for an immediate shopping trip are:

Number 3…behind Milk and Bread…It looks like their companion animals are pretty important to American Consumers or should I say “pet parents”.

What then is the bottom line for the Pet Industry? How does it stack up against the total U.S. retail industry? One last chart… 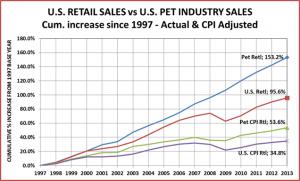 Through good times and bad, at full retail or adjusted for inflation, since 1997 the Pet Industry has performed at least 50% better than the overall U.S. retail market.

It is different from many industries because of the emotional element in caring for and providing for companion animals. Americans have almost a “family like” connection to their pets. They also have proven that they are very willing to put their money where their heart is.

So to answer the question, “Why invest in the Pet Industry?”… Because it makes $ and sense!

Many consumer Product categories have strong seasonality. The pet industry is no exception. Of course, consumers buy pet food and supplies all year round. However, many segments, like Collars and leads experience a big boost at retail in the Spring as people and their Pets spend more time outdoors. By the same token, the Fall chill brings the promise of Winter’s inevitable cold, so apparel and “indoor” product sales begin to climb.

In terms of retail “lifts” attributed to a particular date, Halloween has become the U.S.’s second biggest retail holiday. The Pet Industry has jumped on board with hundreds of millions of dollars in pet costume and toy sales.

However, nothing can hold a candle to Christmas. The lift associated with Christmas has been a long tradition in America. It is a season for gift giving and the increased retail “traffic” in the stores generally gives a boost to most categories – people products or pet products.

For many years, the Holiday shopping season officially kicked off on “Black Friday” – the day after Thanksgiving. That has changed. With Christmas items already out in many stores for over a month and Black Friday sales now starting on Thanksgiving day or earlier, the “push” for the consumer’s dollars gets more frantic every year.

How much of a gain in retail sales actually happens during the holidays and has the ever increasing hype boosted the overall “lift” in retail sales. The US Census Bureau historically tracks retail sales by month. Let’s use it. 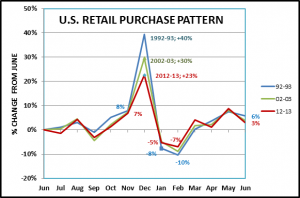 So the lift is unchanged in November as people delay purchasing, waiting for the kick off sales. The December lift is about ½ of what it once was but the Jan-Feb trough is just as deep as ever. It doesn’t seem like the hype is helping. There is one other small factor to consider – profit. You may recall from the earlier posts on Pet CPI that the prices on Pet Supplies and Food drop precipitously in December. It appears that the big lift comes with a price tag…profit margin.

Regarding holiday lifts, not all retail channels are created equal. Let’s take a look at the 2013-14 season from the viewpoint of several large retail channels. 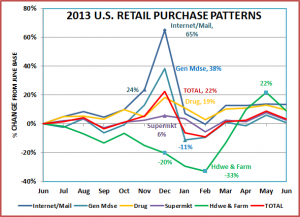 Percentages are one way to look at the situation. Let’s try looking at it with a slightly different “spin”. 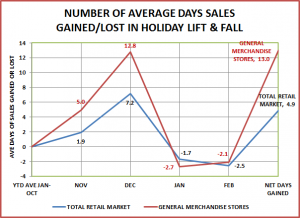 Christmas holiday retail spending is still growing. However, despite all the publicity and work, the “traditional” retail holiday “lift” seems to be getting relatively smaller and perhaps less profitable. We have no choice but to keep it up. The competitive pressure is just too strong. However, maybe we should consider expending some time and effort to try to bring January and/or February out of their “traditional” trough…pad the “fall” with some extra dollars.

Later this month, we’ll do a CPI update. Will Pet Food and Supplies pricing continue to rise…?