The CPI data for September is out. The big news again is from…Supplies – Prices Up, Way Up! This is the first September increase for Supplies prices in 5 years and at 1.38% – the 6th largest monthly increase in history. In recent years, driven by drops in Supply Prices, September had become the month for lowest overall pet prices…not in 2014. 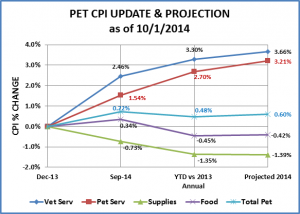 Ultimately there is little change from last month’s overall  Total Pet projection…up 0.6% for the year versus up 0.55% for the year. However, the way that it was produced was interesting. Service Prices (Vet and Non-Vet) have slowed their inevitable climb while Pet Supplies started back up…in spectacular fashion

I think the best way to appreciate what is happening and to discuss what is possibly in store for the balance of 2014 is to look at the pattern by month.

Here’s what the last 13 months of CPI’s look like. 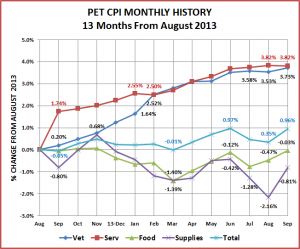 This graph is definitely more interesting and makes it easier to “see” how the action in the 4 individual segments produce the overall industry total. There is a mix of slow steady climbs and…roller coasters.

Pet Services – Basically climbed steadily for the first half of the year, then flattened out. Expect prices to climb to a peak in December. The prices in this segment have grown unchecked for 16 years at a 3.4% average annual rate of increase. They need to slow down or they will inevitably face a correction in the amount of services consumers buy. This “correction” has occurred in every other pet segment.

Vet Services – As you recall from a previous post, since 1997 Veterinary Prices have risen at a rate that is 46% faster than Human Medical Care. For the past 4 years the amount of Veterinary Services purchased by consumers has been effectively flat. Price increases have slowed since April and been minimal since June. The August “dip” this year was normal. Last year the “dip” was followed by 5 months of rapidly rising prices. Expect prices to continue up for the balance of the year – peaking in December.

Services Total – Since February 2014, these two segments have been performing in “lockstep”. You almost only need 1 line on the graph.

Pet Food – This largest segment of the market has been performing in “untypical” fashion. In a “normal” year Food prices climb from August through November and then drop sharply for 1 month in December. They start back up again in January. Last year, Food prices were essentially flat from August through November. They dropped in December then kept on dropping to the low point in March. The second quarter brought increases followed by a “normal” July drop. So far, August and September look pretty normal. Expect prices to rise through November with a fairly substantial drop in December. Note: the CPI for Pet Food in September of 2014 is almost exactly the same as it was in September of 2013. Expect overall prices to be down for the year – the second time in history.

Food Clarification: Although the segment is called Food. The USBLS includes treats in this survey. Basically, if it has calories, it’s a food. The consumer has a wide variety of pet foods to choose from, especially for dogs and cats. There are actually even more companies that provide treats. At SuperZoo and GPE, there were over 240 exhibitors (1 in 4) offering dog and/or cat treats. This enhanced competitive environment could be a factor in pricing pressure.

Pet Supplies – Although it came in an unexpected month, Supply prices finally went up…big time… +1.38%. Monthly price changes of over 1%, up or down, have occurred on average less than once a year. The last time that Supply prices rose in September was 2009. Prices then uncharacteristically dropped in October and November. In fact, October 2009 marked the starting point of the current 5 year deflation. Let’s hope that history doesn’t repeat itself.

Coincidently, the big increase in the CPI also put this segment at exactly the same level as it was one year ago – in September 2013. Although, we have a different perspective, as September was the pricing low point for last year. We also should note that prices are currently at the same level as they were in March 2008 – over 6 years ago. Expect prices to continue up in October and November, then drop sharply in December. Net drop for the year should be less than 1.5%.

Pet Food & Supplies – Both of these segments usually have an annual rollercoaster ride. Although, the peaks, valleys and monthly changes on the Supplies ride tend to be more extreme. Let’s note again that both segments are almost exactly where they were one year ago. Combined, the difference is less than 0.02%. Look for 1 more dip in this year’s ride – December.

Total Pet – The monthly performance of the Total Segment is also a roller coaster because of the influence of Food & Supplies. Services are pretty consistently up so they just tend to keep the prices in the market higher. The Food segment is the largest, so the overall market tends to mirror it’s pattern – except when there is a big disparity in performance. Look at August 2014. Services – Flat; Slight increase in Food; Big drop in Supplies. Result: Total Pet down slightly.

Expect prices to rise in October and November, then drop slightly in December. The amount of the December dip will depend on how much Food and Supplies fall. For the year, prices should be up about 0.6%, matching the lowest annual increase ever – which occurred in 2010.

Note: An updated printable version of all relevant 2014 posts is available. It has a table of contents for easy reference and is segregated by chapters to facilitate printing of specific sections. To receive an electronic copy (including this post) by e-mail, contact me at gpsforpetbusinesses@gmail.com

We made the grade. Expenditures on Pets are now being reported as a separate entity on the annual Consumer Expenditure Survey done by the Census Bureau on behalf of the U.S. Bureau of Labor and Statistics. Previously, Pet expenditures were bundled with toys and playground equipment. (go figure)

What is the CE Survey and what does it mean? The first Consumer Expenditure Survey was done over a 3 year period in 1888-91 to look at worker’s spending habits. The spending of our workers was considered to be a factor in U.S. production costs and impactful on foreign trade. Over the next 90 years, 7 more expenditure surveys were done for various reasons usually in response to radically rising prices, a depression or an impending or current war.

The rapidly changing economic conditions of the 1970’s highlighted the need for more timely data. In late 1979 the current program of annual reports was begun. The primary purpose was and is to collect data to revise the pricing sample used in the Consumer Price Index and to provide information on the spending patterns on U.S. households from the viewpoint of a variety of demographics.

Since the CPI has become such an important factor in U.S. fiscal policy making, the accuracy is of paramount importance. The CE survey is somewhat complicated and the methodology is constantly being reviewed and revised to facilitate the process. Basically, it consists of 5 consecutive quarterly interview surveys with each participant in conjunction with a separate “spending” diary survey. This data is then merged into a summary report. The participating households change every year. (The households are selected but participation is voluntary.)

OK, enough background. The report lists 100 categories and subcategories of expenditures. I have cut it down to the “pet-essential” information and added some calculations. Here’s what the Pet Expenditures for 2013 look like from the viewpoint of household income.

Clarification: The study is based upon Consumer units. The term Consumer Unit is often used interchangeably with household but a household can have more than 1 financially independent consumer unit; ex: boarders, dormitory situations, permanent hotel residents, etc. The number of consumer units is always slightly greater (1-2%) than the number of households. The key is financially independent buying decisions. For our purposes the difference is not significant.

The results from this survey, while not in exact agreement with other sources, reinforce the size of the Pet Market and the spending in regard to income demographics. It confirms that slightly over 50% of the spending on pets comes from households with an income of $70K or more. This supports the assertion that there definitely is a market for “higher ticket” Pet items.

However, we also need to remember that $70K is not what it once was. Since 1997, the U.S. Dollar has lost 45% of its buying power. The numbers also highlight the spending disparity that goes along with income disparity. The under $70K households spend less than less than half as much on their pets as the over $70K group…and there are twice as as many of them – 58 million. In a non-pet related fact, take a look at the average total spending for the under $70K group. They spent 10% more than they made – usually, not a good long term plan.

Under $70K or over $70K, Americans are looking for a value. I believe that we are seeing this reflected in the current pricing deflation in Food and Supplies and in the slowed growth in the amount of Veterinary Services. There is also a retail consumer “migration” going on with Supercenters, Value Stores and the Internet becoming favored destinations. All these are issues which should be addressed.

In comparison to many other categories, the growth of the U.S. Pet Market has truly been a “success” story over the past 20 years. Driven by America’s growing love for their companion animals and nurtured by organizations, manufacturers and retailers, the Pet Market has become an economic force in the consumer marketplace. As you recall, the U.S. government first took note of the significance of the market back in 1997 when they established separate CPI measurements for each of the Pet Segments. In their most recent Consumer Expenditure Survey, published last month, for the first time they separated spending on Pets as it’s own category. This is another piece in the puzzle which will give industry professionals more data from which to make more informed and better decisions – critical to maintaining the industry’s strength.

On a final note, let’s put the $58B in perspective. In 2013, U.S. consumers spent $5 Trillion dollars at retail. Spending on Pets was about 1.2% of  the total. We are definitely becoming a bigger “drop in the consumer spending bucket”. Take a look at how we compare to some other categories. 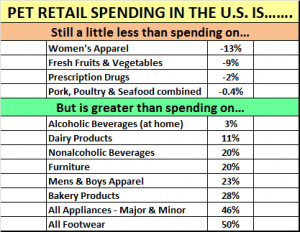 The CPI for September will be released later this month. In recent years, September has been the low point in Pet Prices for the year. I will post an update as soon as possible.