In the first 2 Posts we looked at the individual Market segments. Let’s see how they come together to produce the Total Market from 2009 to 2014.

Here is the data for the TOTAL PET MARKET 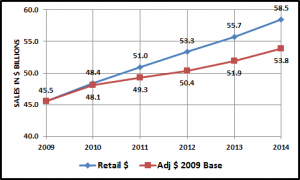 As we said, in 2008 and 2009 the Pet Market took a dip. Although Retail Sales increased, for the first time consumers bought less in terms of the amount of goods and services.  It rebounded in 2010 and appears to be growing again. Here is a summary of our findings:

Yes, the Pet Market has “bounced back” and is once again growing in the amount of products and services consumers buy – not just the Retail price we charge them. However, we have seen that every segment of the market has price sensitivity. It appears that a healthy Pet market requires an overall CPI increase in the range of 1.5 to 2.5%.

Pet Food is of course the largest segment and the ultimately the “driver” of the industry. Because of the usage rate this is a very price sensitive segment. The consumer has shown that they will accept reasonable increases in prices just as they have in the human food & beverage segment – 1 to 2.3%. Quality is also of ever growing importance as Americans become more “nutritionally aware”.

Pet Supplies is the other side of the coin. In the last 20 years this Segment has been systematically commoditized – one category at a time. Rawhide, tieouts, collars & leads, cat toys, dog toys…to name a few, are largely viewed by the consumer as commodities. And the list of “transformed” categories keeps growing. With a commodity, brands don’t matter. 64% of Americans now believe “Brand names are not better quality” (Time – 11/1/12). Only 25% of Americans consider Brand loyalty as a determining factor when making buying decisions. (Forbes 1/7/13) So the price becomes the only issue for the consumer. If the price deflation continues in this segment, manufacturers will need to run their businesses even more efficiently because of escalating price pressures. Of note: through May of 2014, the CPI for supplies continues its downward trend.

The Veterinary services segment is an area of legitimate concern. Although retail $ have increased, the amount of services has essentially been the same for 4 years. We could see major changes in this market, with consumers moving to OTC remedies, the development of improved Pet Health Insurance to mitigate everyday costs, the creation of more Veterinarian groups and even Pet HMOs. This is what ultimately happened when Human Health Care Costs began their radical and continued upward rise in the late 60’s.

So far the small, but rapidly growing Pet Services market has not experienced “hitting a consumer price wall” which has happened in every other segment. As this segment develops a broader consumer base, it becomes more likely that “price” will become an issue.

The Pet Market is complicated with the interaction and inter-dependency of the various segments. Pet Businesses must ultimately focus on the 3 “drivers” of the American consumer”:

Each Pet business needs to take a hard look internally at how they do business. They need to maximize their efficiency in every aspect of the business in order to succeed in a Pet Marketplace which has become more consumer demanding and competitive.

This link will connect you to a mid year update,

In our last post we discussed the performance of the the Services segments during 2009-2014. We’ll now turn the spotlight onto Products – Food and Supplies. 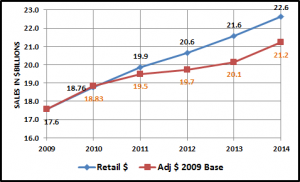 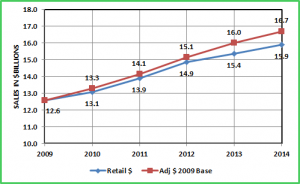 In the final Post in this series we will take a look at how these segments blend to produce the overall Total Pet Market!. 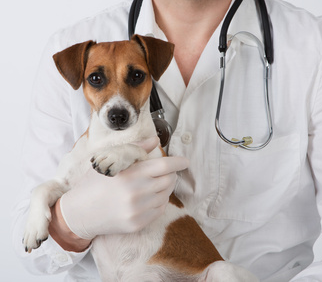 In 2008 and 2009 the Pet Industry took a dip. Retail Sales still went up but in terms of the amount of Pet goods and services, the consumer actually bought less – just paid more – in each of these successive years.

In 2010 this turned around as both Retail $ AND the amount purchased rebounded strongly. We’ll take a closer look at the period from 2009 to 2014 – by industry segment as this recent market performance has a direct bearing on the future.

There are 4 segments in the Pet Market as recognized by the USBLS:

For this 2009-14 period analysis of this and other segments, we’ll establish our “Base” year as 2009. All changes will be relative to this year’s numbers.

Here’s a “Visual” comparing Retail $ to Sales adjusted to 2009 to remove price increases: 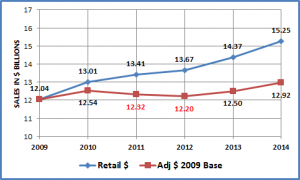 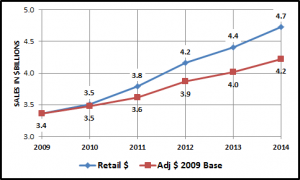 In our next Post, we’ll look at the Pets & Supplies and Pet Food Segments.

One way is to use the CPI published by the USBLS to adjust each year’s retail sales back to 1997 ($) Dollars (the base year).

When you do that you get a spreadsheet that looks like this: 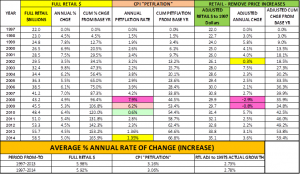 A lot of details! We can refer back to this chart to reference specifics. Let’s look at the Bottom Line in a more visually friendly way. 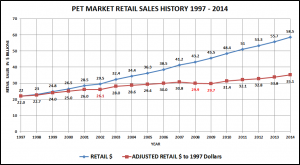 So… “How much of the growth is real?” Obviously, in terms of full retail dollars, the growth is all real. You can take it to the bank. However, more than 50% of the average annual growth has come from price increases, not from increased sales of goods and services. The resulting price adjusted annual growth rate of 2.8% still indicates a moderately strong Pet Market.

It should also be noted that like other markets, Pet does have price sensitivity. While Retail Sales have increased every year, large price increases in the Recession years resulted in consumers buying less – usually not a good plan for long term growth. The good news is that they have responded positively to subsequent price drops and a continuing moderate rate of increase in the CPI.

Of concern is the continued high rate of price increases in the Veterinary Segment. When will the consumer react? On the other end of the spectrum, will deflation continue in the Supplies Segment. This will put added pressure on manufacturers.

In our next post we will begin a detailed look at the period from 2009 to 2014. This recent history has the most relevance to the continued growth of the market .

In the period from 1997 to 2014 prices in the Total Pet Market increased 66.8%. Was this an “across the board increase” or are there specific areas “driving” Petflation? In 1997 the USBLS officially divided the Pet Market into segments and established it as the base year for future calculations. The segments are:

The Prices in the huge Pet Food segment have increased 57.7%. This is only slightly greater than the 53% increase in the comparable Human Food & Beverage market. There have also been variations. After big increases in 2008 & 2009, prices actually dropped in 2010 and the increases since then have been more moderate.

The Pets and Pet Supplies segment tells a totally different story. Driven by Supplies, this segment had regular small increases for years. In 2005 these increases began to accelerate with huge increases in 2008 and 2009. Then in 2010 prices suddenly dropped and have stayed down in all the succeeding years. In fact we have actually even seen further declines. The total Petflation for Pet Supplies from 1997 to 2014 is only 14%.

Now it is easier to see how the segments are interacting to produce the overall Petflation rate of 66.8%.

Pet Food is the largest segment so changes here have the greatest impact on the Total. The inflation rate of 57% in Pet Food is less than 9% greater than Food & Beverages so this has a stabilizing influence.

The big drivers of Petflation are Services – both Veterinary (125%) and NonVet (75%). The NonVet Services is a small segment but Veterinary has become large and is “fueling” much of the increase.

The CPI increase in the Pet Supplies segment has invariably been low and has even become negative. These consistently low prices have helped mitigate overall Petflation.

Now what does this all mean? What is the Industry bottom line?

In the next post we will blend the CPI increase with the Retail sales, factor out price increases and show the performance of the market in terms of the amount of Pet Supplies and Services sold. 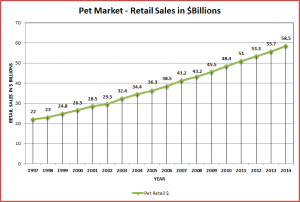 Why pick 1997 as a “starting” year? Why not 1996 or 1994? As it turns out 1997 was a very significant year for the industry. In 1997 the United States Bureau of Labor and Statistics (USBLS) recognized the growing significance of the market by dividing the Pet market into distinct segments and establishing 1997 as the base year for future measurements.

The USBLS produces a variety of important economic statistics but perhaps the most famous and arguably most impactful is the CPI – Consumer Price Index – the inflation rate. Changes in the CPI directly affect the income of over 80 million Americans. It is also used by the President, Congress and the Federal Reserve Board in formulating fiscal and monetary policies.

We all know that price increases in Pet Products are a part of the business. When the costs of energy, labor and raw materials rise, price increases become a business necessity. However, since price increases can directly affect consumer purchasing decisions, they can’t be taken lightly.

Let’s take a look at “Petflation” since 1997 and see how it compares to the overall CPI and to some other industries:

The first thing that you notice is the strong and unchecked increase in prices for human medical services. Regardless of overall economic conditions, medical prices have consistently gone up. This has to be a factor in our current health care situation.

By the way, prices don’t always go up. Prices in the Apparel market are actually 3% less than they were 17 years ago. A big factor is probably the “offshore” movement of manufacturing in this segment.

Was it always this way? The answer is no. The first year that Petflation exceeded the national CPI was 2002. It also began to accelerate in 2006 with major increases in 2008 and 2009 – in the midst of the national economic recession.

In 2010 this abrupt upward spiral stopped. In the years since, Petflation has “mirrored” the overall CPI and the Food & Beverage Market.

What does all this mean? How has it affected the consumer? We will get to that “bottom line” but first we’ll look at what is “driving” the Pet price increases. Remember the USBLS divided the market into segments.

In our next post we’ll look at the CPI since 1997 for each of the segments in the Pet Market. Have prices gone up equally across the board or….